Coronavirus (COVID-19). Visit our coronavirus page for up to date information relating to your holiday 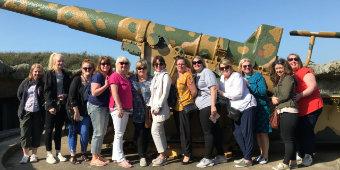 The trip was organised by VisitGuernsey and co-hosted by Aurigny airlines. Some of the agents participating had won their place through a VisitGuernsey competition.

The trip coincided with the release of the film throughout UK cinemas and the agents were treated to their own special screening of the film.

Also included in the trip, was a film themed guided walk around St Peter Port as well as a coastal tour which gave agents a true taste of the film and the island.

Gill McCarthy, Airways Holidays Sales director says: “The movie will really spark an interest in visiting the island of Guernsey, not just because of its beauty but also to discover the fascinating history of the islands occupation. Our sales increased by 65% in the week year on year when the film was released so all the activity around the movie is having an effect! ”

The agents clearly enjoyed the trip. Joanne Bell from Co-op Travel said: “I wanted to say a big thank you to Airways Holidays and VisitGuernsey for the wonderful trip. For such a small island they had a lot to offer and the weather was just the icing on the cake. ”

Airways Holidays are currently offering The Guernsey Literary and Potato Peel Pie Society Break. This is a 3 night package, departing on 22nd September or 19th October. It includes a half day island tour and a 2 day bus-pass from only £219 per person by sea* and from only £298 per person by air*

Agents can earn a £10 love to shop voucher for any online booking made in April & May as well as the chance to win their own trip. See Airways Holidays website for details.

* Prices are based on two adults sharing a standard twin or double room at the Pandora Hotel on a B&B basis, travelling as foot passengers from Poole Harbour by sea or by air from London Gatwick including hold baggage. Other hotels and travel by air from a wide selection of airports are also available. Prices are subject to availability. The package price includes a half day island tour visiting locations described in the book and a 2 day bus-pass, allowing you to explore the island at your leisure.

blog comments powered by DISQUS back to top

Our customers benefit from full financial protection with our ABTA and ATOL bonds.

We work with accommodation providers, airlines, ferry companies, attractions, and many other partners across the Channel Islands' tourism and hospitality industries.

To find our more about business development opportunities, please contact us.

Keep up with our news ›

Be inspired by our videos ›